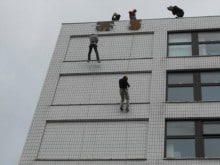 Five of our team took part in the 2013 abseiling fund raising event. The  courageous team  raised money in support of a local Oxford charity SeeSaw who provide grief support for the young in Oxfordshire. The event took place on Sunday 23 June 2013 at the Womens Centre, John Radcliffe Hospital. Darren Green, Partner, said I was pleased to head up our team of brave volunteers (well nearly all volunteered!) for such a good cause. It was great to raise sponsorship for such a good cause. Jane Elliott Fundraising Co-ordinator, said “Many thanks to 5 intrepid employees from MGroup who took part in SeeSaws Annual Abseil on 23rd June. Despite the high winds they all managed the 100 ft descent in great style raising vital funds for SeeSaw.”