Our weary turtles (aka Peter Smith, Darren Green, Mark Crossfield and Steve Basham) have returned from their awesome long weekend competing in the Twin Town Challenge 2016, raising money for the SpecialEffect Charity.

Their epic journey started on Friday 27th May at Blenheim Palace where they lined up with 99 other cars ready for the first stage of the challenge – to head off to Silverstone and do circuits of the Formula One track in their (bought for under £500 and held together by decals and little else) turtle-wagon. 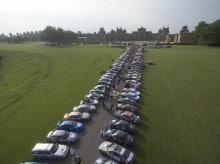 Ready for the off at Blenheim Palace 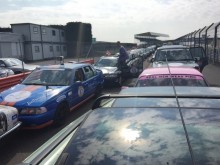 The smell of burning rubber

After Silverstone it was off to Folkestone to catch Le Shuttle to Calais and then to Le Touquet for a Welcome Reception and a very French supper and drinks evening. The next morning was a treasure hunt around Le Touquet followed by a civic reception where the Mayor and a local member of the French parliament formally greeted all the Twin Town teams. 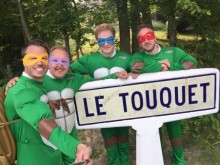 Sunday was le crunch day for challenges as the teams assembled at Le Pilotage Stadium, Abbeville, to do circuits while completing tests such as Car Booty, Car Boxing, Blind Driving and Tyred & Emotional while smiling for the cameras. Luckily everyone still had some energy left as Sunday night was party night on the Rue De Metz in Le Touquet while dancing to The Village Idiots.

The final day, Monday, involved the trek back to to the Calais Eurotunnel Tunnel and the long journey back to Witney where Abbott Diabetes Care Limited were hosting a homecoming party with afternoon tea (cakes courtesy of their staff charity “bake-off”), speeches and prize-giving. Those teams that wanted to could donate their cars for Auction and the money would all go to the Special Effect Charity.     If you would like to donate to Twin Town Challenge 2016 and help us achieve our fund-raising target for SpecialEffect please visit our donation page and give what you can.  The donations page will remain open until the end of August. 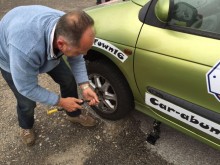 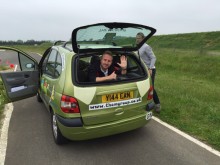