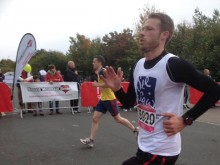 Team member, and former Oxford United player, Steve Basham, successfully completed the 2014 Oxford Half Marathon on behalf of the Charity SeeSaw in their Dream Team. Steve completed the run in a time of 1 hour 35 minutes and 48 seconds. He finished the race in 503rd position out of 7000 runners. Jane Elliott from SeeSaw said  We are hugely grateful to Steve Basham of The MGroup for taking part in the tough Oxford Half Marathon raising vital funds for SeeSaw on Sunday. Through radio interviews and his links with Oxford United Steve has also helped raise awareness about our work supporting bereaved children throughout Oxfordshire. If anyone still wishes to sponsor Steve here is the link.